It’s been a week since I brewed for my German-style wheat beer and put the wort in a fermenter. Since that time, the yeast has been diligently chowing down on sugar and turning it into CO2 and alcohol while the fermenter itself sits nice and cozy in the laundry room. (I use the laundry room because it’s both one of the darkest and warmest spots in the condo – I tried the bedroom closet when making my first home brew and my beloved husband was none too pleased when it started smelling like a brewery in there).

The recipe I’m using is from zymurgy magazine and it just calls for moving onto bottling if things look good or letting the wort stay in the the fermenter for another week. The first recipe I did also included moving my wort into a glass carboy and letting it condition for another week or two before bottling. While this extra step is not a part of the zymurgy recipe, I’ve found it’s one of these personal preferences that lends itself to a bit of disagreement among home brewers as to whether it’s absolutely essential or should never be done. This step also also often called “secondary fermentation” which gets even more people’s knickers in a bunch because the actual fermentation show has pretty much taken a bow and exited stage left by the time you move the wort to another container. Rather than list off the reasoning held sacred and dear to both the the pro-secondary and anti-secondary camps, here’s a quick link to two folks that have done just that: The Great Secondary (Fermentation) Debate by Dave Carpenter and Secondary Fermentation, Pros and Cons by Al Folsom. (Google will provide a plethora of other examples of course but these were two articles that helped me). I was pretty happy with using a secondary on the first go and figured I’d give it another shot with this brew as well.

First step, take off the fermenter’s lid and behold the wort (that icky looking ring around the top is just the some of the gunk left over after the yeast had its party – and one of the reasons why I’m a fan of transferring to a secondary). 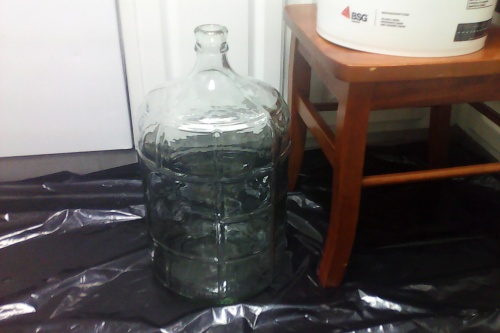 Since the wort needs to siphon into the glass carboy that means the primary fermenter gets to sit on a pedestal above it.

Once everything’s in place, the only thing left to do is get that auto siphon to do its magic.

One end into the primary…

And the other in the secondary. There was an extra picture my husband took that included more of the auto siphon itself but that also included too much me at a horrible angle so I opted not to use that – this one as my lovely gray slipper in the bottom right corner though so some of me is included.  🙂

And now we have a glass carboy full of worty goodness and ready to go in the laundry room!

For readers that have been with this blog for a while, I know it seems like we’ve left stories and odd characters behind (though one has to admit that yeast can be quite a unique character itself). I promise we’ll get back to stories that don’t involve fermentation soon!

Filed under The Dry Erase Board