Cucumber in beer? Of course!

When I first started typing this post, I did so while drinking a glass of Coolcumber (made by the fine folks at Wicked Weed) which is brewed with, you guessed it, cucumber. Yes, cucumber and beer can apparently happily marry and also included in this particular brew was basil and juniper berries. That may sound more like the ingredients of some healthy gourmet side dish but the result is a unique and wonderful oddball beer – the sort of drinkable creation that inspired me to try my hand at home brewing!. For now, I’m still sticking with recipes that have been declared newbie friendly but I look forward to the day when I’m sipping from a glass with my own beer brewed with cucumber. Or chocolate and cherries. Or chili peppers. Or maybe something like the mango and habanero double IPA currently in the fridge. 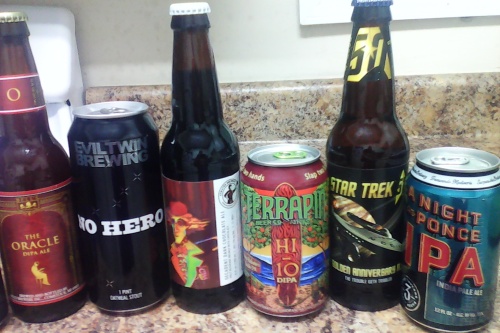 A sampling of what waits for me on our fridge bottom shelf…the mango and habanero one is the Terrapin in the middle (between an ale inspired by Star Trek and a chocolate stout, what else?). The Coolcumber was devoured before this countertop photograph session.

That all being said, there is such a thing as getting too creative with ingredients and there are admittedly some downright bizarre concoctions out there. Beer brewed with goat brains anyone? Mmmmm…no. Strangely (sadly?) I’m not making that example up. Here’s a link to beerconnoisseur.com’s post from a while back with some outlandish brews that have the more adventurous stomach in mind (including the goat brain one): https://beerconnoisseur.com/articles/strange-brews-10-weirdest-beer-ingredients. I originally thought it easy to say that I’d never consider anything more than mundane additions until the idea of adding catnip to future brews entered my mind. Yes catnip. I have my beloved husband to blame for the notion.

You see, my husband has a wonderful mind that mixes creativity with business and this led him to suggesting that I name future beers after our many cats. Did I mention we have four cats? Well, two according to our lease and two other homeless ones that adopted me. (Plus one or two extra kitties that know where to find a bowl of water and dry food outside when in need). So, since I’m well on my way to becoming the crazy cat lady and have an interest in home brewing, my dear hubby has been encouraging me to combine the two loves. This is a wonderful idea and, once I’ve made a few more beginner batches, I aim to do so. But you see, I have a mind that does not combine creativity with business quite as well. So as I drove home from work today, I began having visions of how to take my nine lives brew to a truly cat-tastic level and this included thought processes such as Oh, what if I put a tiny dose of catnip in the beer? I’m sure it only affects cats…doesn’t it? Of course it does, it would just be another herb, like throwing in mint but cooler and…cattyier. Oh, oh, and I could do a cream soda as a non-alcoholic option because cats love cream…beer idea win, yeah!

This happy eureka lasted only until I started studying up a bit more on how catnip actually affects non-cats (a.k.a. humans). According to WebMD.com’s wisdom under the side effects tab: “Catnip is POSSIBLY SAFE for most adults when taken by mouth in small amounts. Cupful amounts of catnip tea have been consumed without serious side effects. However, catnip is POSSIBLY UNSAFE when smoked or taken by mouth in high doses (many cups of catnip tea, for example)…It can cause headaches, vomiting, and a feeling of being ill…Because catnip can cause menstruation, it might make heavy menstrual periods worse…” 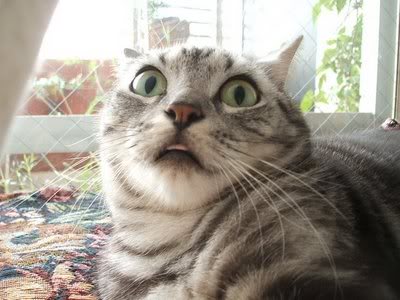 Well…goodbye to that idea. I seriously thought catnip only gave furry felines the crazies but it can apparently cause a lot of bad news for us. Plus, catnip “seems to be able to slow down the central nervous system, causing sleepiness and other effects.” That…is…not…a good addition for anything alcohol.

So, I’m guilty of at least understanding the aspirations of brewers who push the envelope a little too far. But, with the knowledge I’ve gained, I think we should all just say no to catnip.

And poo (not kidding, if you haven’t checked out the beerconnoisseur.com link yet, there’s a brew made with that too).

Filed under Homebrewing, The Dry Erase Board

Tagged as beer, home brewing, just because you can doesn't mean you should