A Day Unlike Any Other Day

As they say, there are certain events that become so etched into both history and memory that you remember where you were when they occurred even after several years have passed. 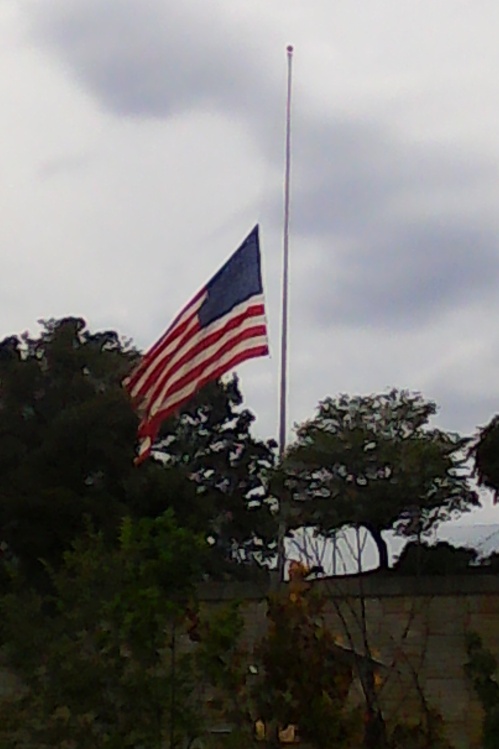 Flag flying at half-staff today just past the entrance to the nature trail I walked on today.

I was a student at UNCG in the Fall semester of 2001 and had an 8:00am media law class every Tuesday and Thursday. Hardly a topic that should be tackled at such early hour in my opinion (and many apologies to Dr. Linder for the fact that my still half-asleep brain barely retained a quarter of her lectures as a result). It was in this still waking to the world and going through the motions state of mind I found myself in as I trekked across campus after class and back toward my dorm room. Now the time my class ended happened to be when a lot other classes either just finished or were about to start. That being the case, my journey across those sidewalks crisscrossing a modest patch of lawn in front of the McIver building was usually one of the “high traffic” moments as several other students made their way back and forth. From a bird’s eye view, it may have typically looked like a slightly disorganized ant colony in the works. On September 11, 2001, however, the bird got a much different view.

It took me a minute to realize that the sidewalks were more barren than usual and rather than zip zagging my way around other students in a hurry, there were clusters of people talking about a story that unfolded as I gleaned information while walking by. A plane crash? Something about the World Trade Center? Wait, did that girl just say a plane crashed into the World Trade Center? I was suddenly very much awake.

My boyfriend at the time lived in the same dorm as me and just a floor above. I greeted him that morning by banging on the door and saying “I need to see your T.V.” as he groggily let me breeze by him and grab the remote. I had by this point gotten more bits and pieces horror news from people along the way but it all sounded too impossible to be real. But in the next couple hours after I turned on that T.V., it was no longer just a normal Tuesday morning and it never would be just a regular day on 9/11 ever again.

I didn’t know anyone personally that lost their lives or any of the many heroes during the 9/11 attacks but I think it’s impossible to be human and not be moved by images of that day. One thing I didn’t quite think about until our pastor mentioned it at the beginning of today’s sermon is that since this did happen 15 years ago, anyone who is just now in high school or younger won’t have the same etched in memory situation with 9/11 that I described. They were either too young at the time to remember or not even born yet. For some of the youngest members of my family, like my great niece who just turned one last week, September 11, 2001 will be a date in her history class. I think it’s important that those of us who can remember the actual events unfolding before our eyes do so. Otherwise it may truly end up becoming a topic she yawns over in an early morning class.

I know several other people and places have written and blogged 9/11 today and I won’t rehash the event specifics. For anyone needing a reminder (or for folks in that too young to remember crowd), History.com had a good piece on it here.

Filed under The Dry Erase Board