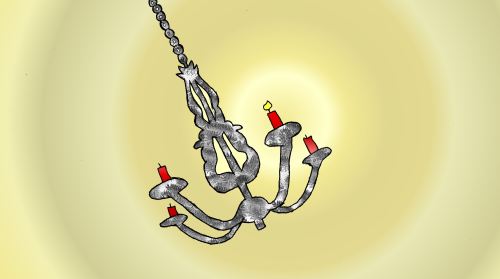 Once again Sylvia found herself being led into a smelly building with questionable occupants. This time, however, the stench was less attributed to spilled ale and more due to the occupants themselves. A burly man with a body that appeared too small for his arm muscles leaned against a rickety front desk. He wore a beige shirt which was likely white at one point given the garment’s spotted color variances. Besides the desk, there was only a staircase leading up to the left, a darkened hallway taking an unknown path to the right, and a single wooden table tucked away in the left corner near the door. The table appeared similar to ones from the tavern, though it was hard to tell given that it was partially obscured by someone sleeping on top of it. The snoring lump lay entirely covered by their cloak aside from a greasy mop of brown hair that trailed off the table’s edge. Sylvia made the mistake of deciding to inspect the floor as well and took an immediate step back as a cockroach large enough to saddle and ride scurried past, disappearing under the desk.

“This is your idea of a safe haven?” she asked, scooping Obmuj in her arms to keep him from chasing after the runaway insect snack.

V shrugged, casually making his way toward the front desk. He took a wide step forward to avoid stepping in the puddle of an unidentifiable stain. Sylvia hoped it was only her imagination the sludge appeared to follow his boot when it passed over. The vampire looked around the room nonchalantly, his eyes seeming to escape notice of the dingy paint peeling off the walls and the fact that the main light source was a chandelier with only one candle lit, hanging crooked from a ceiling that threatened to loose the battle in holding it any minute. Leaning against the desk, he gave a nod of approval. “I’ve stayed in worse.”

Filed under Once Upon a Time

Tagged as blogs, book, fiction, Once Upon a Time, vampires